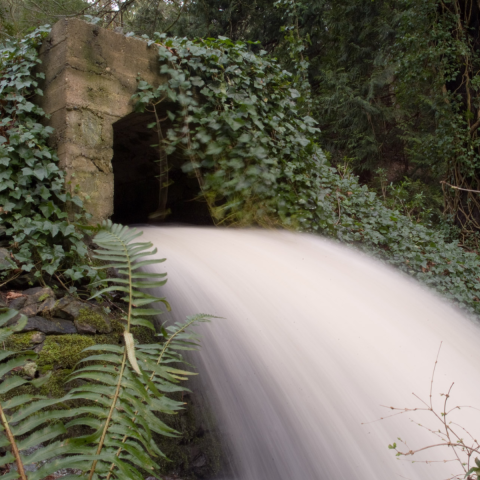 Our coastal Douglas fir ecosystem is vulnerable to invasive species. These species out-compete indigenous species, which damages the unique biodiversity of our area. By identifying and eliminating invasive species, we can preserve this fragile ecosystem for generations to come. It is important to be aware of some local threats to our campus ecosystem.

Poison hemlock is a tall, fern-like plant with distinctive purplish spots on the stems and lacy rosette-shaped flowers. It grows in areas where soil has been disturbed. All parts of the plant are extremely toxic to people and animals.

The Capital Regional District monitors poison hemlock. If you see it growing, do not touch it. Report it to the CRD’s invasive species hotline at 250-360-3302 for removal.

When domestic rabbits escape or are set free by pet owners, they quickly establish themselves in the wild. They eat native plants, damaging the ecosystem. Their burrows can also cause damage and create dangerous conditions. Feeding the rabbits only makes the problem grow, as they return in search of more food.

If you see domestic rabbits on campus, report them to the RRU Gardens and Grounds supervisor. In your email, include the following:

Scotch broom is a spiky green bush that has distinctive yellow blooms in spring and early summer. It spreads rapidly by seed, and out-competes threatened indigenous species.

If you see broom, you don’t need to report it — it’s far too widespread. However, you might enjoy joining one of the many community efforts to help remove it. Check for broom pull events in local newspapers and on the City of Colwood website.

Some species of plants and animals that live on the Royal Roads campus are considered at risk. Their habitat is threatened by invasive species and human activity.

We can protect the vulnerable species in the coastal Douglas fir ecosystem by eliminating invasive plants and animals like the ones mentioned here. We can also protect them by leaving them in place, for everyone to enjoy.

The following species are especially vulnerable: